You are here: Home1 / Personal Development2 / Train Your Mental Muscles – Be a Success! 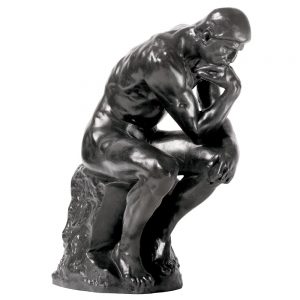 Auguste Rodin showed an early panache for art, but his father could only afford little training for him. For years Rodin did menial jobs, trying to save enough to gift himself an artistic pilgrimage to Italy. Up until 37 years of age, penury and personal setbacks were a dominant theme in his life. But through it all he never, even for a moment, failed to see himself as anything else but an artist.

Michael Faraday had little formal education, but for seven years he served as an apprentice to a book binder. During this time he read as much as he could in preparation for a future that he envisioned for himself. Later on, this cemented his beliefs “… in the one man who works mentally and bodily at a matter than in the six who merely talk about it.”

Annie Malone developed her beauty and cosmetic enterprise following the same principle. Since 13 years of age all she knew and cared for was to do hair styling. She had little or no training in the field then and no financial means to support her dream. But with the help of one of her close relatives, she continued to polish her knowledge in Chemistry and herbal medicine. By her early twenties she was already thinking of creating a hair straightening product that would work without damaging the hair which became a reality some time later.

What did these men and women do differently to deserve the success they had in their lives? They never failed to envision a future for themselves, clung to their visions and worked for it. In their mind’s eyes, they were already an artist, scientist or business owner irrespective of the status early in their lives. Call it visualization, mental imagery or projecting ourselves to the future, this one mental workout can help us fulfill our honest ambitions.

“If one advances confidently in the direction of one’s dreams, and endeavors to live the life which one has imagined, one will meet with a success unexpected in common hours.” Henry David Thoreau

At one or another, all of us use this technique without knowing it in form and substance. For example, before a public presentation almost all of us see ourselves putting across our views in clear terms or successfully delivering our speeches and earning kudos for that. This is mental imagery in its simplest form. Organizational theorist Karl E Weick calls this “future perfect thinking” (1). He says,

“If an event is projected and thought of as already accomplished, it can be more easily analyzed … Managers’ success or failure invoking this complicated linguistic form will have much to do with the success of their planning.”

Organizational mentors, behavioral scientists and psychologists vouch for its effectiveness over and over again. So much so, that the application of this technique is not only limited to the business world, but expands into other arenas like education and sports. In actuality, this is applicable for anyone who wants to achieve some kind of distinction in any sphere of one’s life. As Muhammad Ali’s said, “Champions aren’t made in the gyms. Champions are made from something they have deep inside them – a desire, a dream, a vision.”

Executive coaches and mentors propose various techniques for making visualization or guided imagery a regular habit. Various complex mechanisms from meditations to brain workouts are suggested in the process. But the actual process of creative imagery need not be so burdensome. So, how do you go about it?

Ensue the process by defining your goal. State your purpose clearly to yourself. In the beginning, when you are starting to learn the nuances of creative visualization consciously, do not state too broad a purpose to yourself. Try to accomplish something that lies in near future, perhaps by the end of a 30 day period or so. Doing so will ensure that your focus does not waver from the object and as you achieve success you will also gain in confidence. Research about extensively. Every day add more and more detail to the picture you already have in your mind.

Start upskilling, particularly learn those that are pertinent to what you wish for. Use all the resources available to you. Zuzana Licko, founder of Émigre Fonts foundry, used only a basic Macintosh in 1984 to kick start her passion for learning type designing. Today, her name is one of the most highly regarded in the field. Find and nurture key contacts who can help you with the way ahead.

It is easy to be confused between dreaming and visualizing because the two terms are often used interchangeably. Dreaming is a more passive process. Day dreaming also implies fantasizing, but visualizing our future for ourselves can hardly be a passive activity. It is training our mind to create a proposition for us before starting to prepare for it and living for it. Like all trainings, this too has to be practiced every day of life without fail.

“Take up one idea. Make that one idea your life; dream of it; think of it; live on that idea. Let the brain, the body, muscles, nerves, every part of your body be full of that idea, and just leave every other idea alone. This is the way to success…”
Swami Vivekananda

In the name of creative visualization many people make outrageous wishes and expect those to be fulfilled in their lifetime. That is not how an effective mental projection works. In the next 10 years’ time, you may love to retire from work, own a private jet, travel throughout the year for leisure or so on. But do you deserve to have those privileges? What have you done so far to fulfill these extravagant expectations of yours?

All processes of mental imagery will have to be backed up with solid planning and actions barring which visualizations would be nothing but idle dreams. Thomas, now in his early teens, is a great admirer of Brazilian author Paulo Coelho’s works. After reading his novel The Alchemist, he set his mind on becoming a famous author like Coelho. Thomas bought a few books to improve his creative writing skills. His parents’ enrolled him in a literary club for the young adults and also gifted him a membership of the local library. But Thomas does not feel too keen to nurture his skills by working at it every day. Hardly ever does he turn up for the book reading sessions in the club and never so far has he visited the library. We all know, if this continues, what is going to happen to Thomas’ ambition of becoming an author.

A senior sales manager who wishes to achieve a certain aggressive target by the end of the third quarter, but does not have a plan for doing so, did not inform his team the actionable for achieving such a steep target is nothing but a Thomas in the business scenario. True it is going to be enormously exhausting process to work day in and day out for a dream, but then remember what Michael Jordan has to say on the matter,

“Every time I feel tired while I am exercising and training, I close my eyes to see that picture, to see that list with my name. This usually motivates me to work again.”

To make this process more successful make sure you segregate your broader intent into smaller targets that will ultimately lead you to achieve your original design. Too lofty an ambition may not be attainable at one shot. Failure may lead to disillusionment and eventual abandoning of the scheme itself.

In case of Setbacks

Sometimes it so happens that one particular approach of achieving something does not yield desired results. We all have experienced this at different points in our lives. This does not mean that the original idea will have to be scrapped completely or the process itself is unproductive. It just so means that, we need to adjust our courses and try once again. It may also take longer time to realize something than we at first anticipated. But don’t let this dishearten you.

From being a son of debt – ridden immigrant parents, Andrew Carnegie built an entire business empire.

Your aspirations too, should not be and are not beyond you!

“A dream will always triumph over reality, once it is given the chance.”
Stanisław Jerzy Lec

The Art of Counting the Uncountable
We use cookies to ensure that we give you the best experience on our website. If you continue to use this site we will assume that you are happy with it.OK, got itCookies Policy
Scroll to top