You are here: Home1 / News2 / These Biotech Employers Hired the Most New Grads In Life Sciences

Although spring graduates have been on the market for a few months, summer graduates are just heading out into the big bad world looking for jobs. But who’s hiring?

Forbes, working with online statistics provider Statista, surveyed more than 30,000 people in the U.S. who were working for companies that had more than 5,000 employees. They asked them to evaluate, on a scale of zero to 10, how they would recommend their employer. They also asked them to rate their peers in their industry.

They came up with a list of 500 companies across 25 industries where the survey respondents highly rated their employers. They also determined how many new graduates those companies hired.

In the life sciences sector, four companies made the top of the list: Roche Diagnostics (RHHBY), Genentech (RHHBY), Regeneron Pharmaceuticals (REGN), and Stryker (SYK). BioSpace takes a look at those four companies, who and how many new graduates they hire, and in what types of jobs.

Roche Diagnostics (RHHBY) appeared on an earlier BioSpace article titled “The 5 Best Life Science Companies with Great Parks and Work Culture.” It clearly has that kind of reputation. Earlier this year (February 2016), the company had 181 job openings. On a Fortune magazine profile of best places to work, it ranked 73, and has won numerous “best places to work” awards in several countries, including France, Italy, Poland, Spain, and the U.K. Working Mother gave it the “Working Mother” Award in 2014. 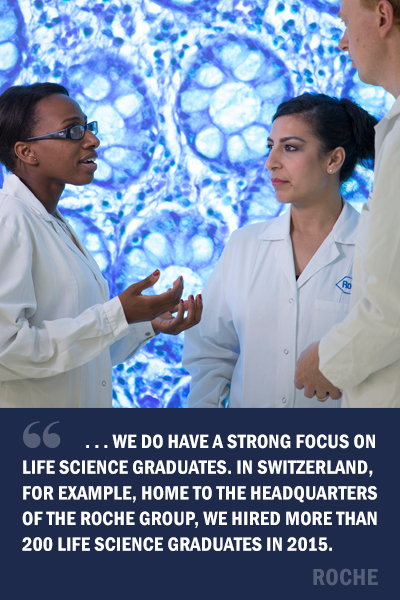 The company indicates it looks for life science graduates at all degree levels. Some business areas require specific degree levels. Interestingly, the company’s spokesperson said that “A life science background does not mean that as a graduate you will only apply for scientific positions and spend your life in a lab. Roche offers many different opportunities like Trainee programs (Management Start Up, Regulatory Affairs Trainee Programme, just to name a few) or positions where you need a life science background but work on different topics in Pharmaceuticals and Diagnostics (like Business Development, Partnering, Investor Relations, Communications…).”

Otherwise, for new graduates looking to work at Roche, having some industry or international experience, such as an internship, is a plus. Roche also offers a “RISE-Programme, a Roche internship for Scientific Exchange, with invites PhD and medical students to gain experience and insight into drug discovery and development.”

“As a next career step for PhDs,” the spokesperson told BioSpace, “we offer the Roche Postdoc Fellowship Programme where new scientific talents are mentored by excellent scientists at Roche and Academia for conducting creative science.”

For more ideas of jobs at Roche, visit awww.careers.roche.ch/careerfinder.

And finally, the spokesperson says, “For both the Pharmaceuticals Division and the Diagnostics Division, Roche looks for people who are passionate about science and about transforming patients’ lives.”

Genentech (RHHBY), headquartered in South San Francisco, Calif., is also a member of the Roche Group. It was founded in 1976 and is generally called the first modern biotech company. It was acquired by the Roche Group in 2009. Its Bay Area campus is the headquarters for Roche pharmaceutical operations in the U.S., and the Genentech Research and Early Development center operates independently within Roche. 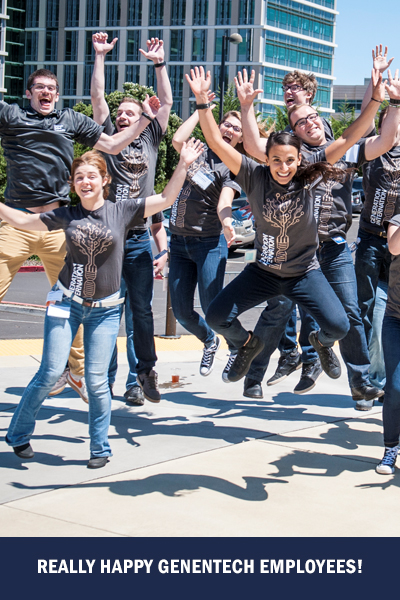 It’s likely that all of the comments regarding Roche Diagnostics also applies to Genentech. The company was ranked #1 in BioSpace’s April article about the 5 Best Life Science Companies, noting that the company, as of February 2016 had 1,000 job openings (with a daunting 247,818 applicants), and employs 52 percent women and 46 percent minorities.

Genentech is noted for both its Silicon Valley-like corporate culture, and the numerous perks it offers its employees. It staffs about 14,000 people, with about 1,100 of them researchers, scientists and postdoctoral fellows.

It recently broke ground on a new 68,000 square-foot employee center. Before it was built, it surveyed staffers, asking what they wanted. From those wish lists, the new center will include a farmers market, pool tables, a primary and urgent care center, and its Building 35 will include nap pods and a cafeteria that features Indian and vegan menu items.

“At Genentech, we’re dedicated to creating a connected, inspiring culture for more than 14,000 employees who come to work every day to deliver on our mission of helping people with serious diseases,” Nancy Vitale, Genentech’s vice president of human resources told BioSpace earlier this year. “While our company has evolved in the 40 years since our founding, we strive to remain patient-centered, science-driven and people-focused. I believe this clarity of mission, combined with our focus on inclusion and employee wellbeing, attracts the most talented, diverse people and empowers them to do their best work to help our patients.”

To learn more about opportunities, check out the new job postings at Genentech!

Regeneron Pharmaceuticals (REGN), which ranked #4 on the BioSpace list of the 5 Best Life Science Companies, is headquartered in Tarrytown, New York. The company was founded in 1988 and focuses on therapies for eye diseases, high LDL cholesterol, and inflammatory conditions. It employs about 4,500+ people in the U.S. 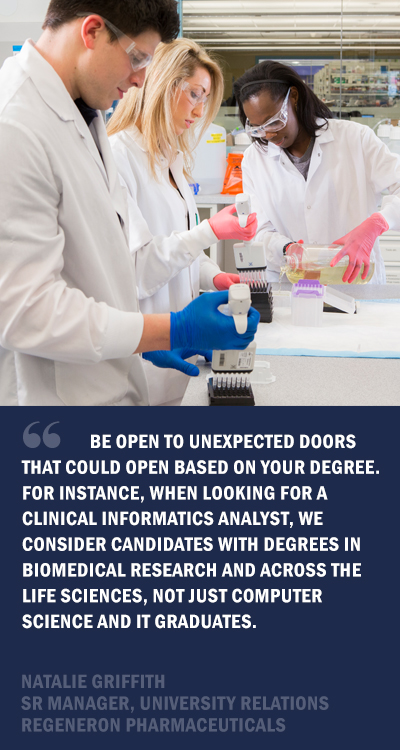 Forbes listed the company as number 91 on its list of America’s Best Midsize Employers in 2015, and number 3 in Innovative Companies for its World list for 2016.

“We hire many recent life science graduates for positions both in and out of the lab,” Natalie Griffith, Regeneron’s senior manager of University Relations, told BioSpace. “We like to start these relationships early through internship programs for students of all ages—high school, college, graduate and even post-doctoral. Mentorship and hands-on training are key focuses for all our employees, so we think this is a great place for recent graduates.”

The company looks for life science graduates with a very broad level of degrees and experience. Griffith says, “We’re interested in the type of degree and focus area that translates into the specific skills or would allow for a quick learning curve required for a job position at Regeneron. For example, if we’re hiring an engineer in our Pre-Clinical Manufacturing and Process Development group, we look for a graduate with a bachelor’s or master’s degree in chemical or biochemical engineering. If we’re hiring a protein expression scientist, we look for a PhD with a focus area in molecular biology. In addition to degree, we want to see that graduates have relevant experience in the lab, internships or have completed thesis projects.”

Away from that kind of nuts-and-bolts interest, Regeneron wants employees with a strong sense of curiosity and a collaborative nature, says Griffith, “such as asking thoughtful questions and showing enthusiasm and examples about working closely with a team. These qualities are essential to our culture and drive the science and innovation here.”

Griffith encourages life science graduates to practice interviewing, and to “interview” Regeneron to make sure the company is a good fit for you. Internships, as in most fields, are strongly encouraged. She also points out, “Be open to unexpected doors that could open based on your degree. For instance, when looking for a clinical informatics analyst, we consider candidates with degrees in biomedical research and across the life sciences, not just computer science and IT graduates.”

She also encourages new graduates not to jump at the first job opportunity to come your way, not necessarily the easiest advice to take.

And get to know the company. Each of the companies profiled here have different cultures, and some may be better fits than others. “Our mission has always been to use the power of science to bring new medicines to patients, over and over again,” Griffith told BioSpace. “We work hard to achieve this very meaningful goal, but we have fun doing it. Our culture is unique, whether we’re celebrating Cheesy Hawaiian Shirt Day, competing in Lab Olympics (picture Petri Dish Relay Races and Speed Pipetting) or giving internal data presentations over pizza on Fridays. We’re proud to accomplish impactful work in a collaborative and encouraging environment.”

Stryker (SYK), headquartered in Kalamazoo, Mich., is a medical supply company best known for its surgical supplies. It develops and markets implants used in joint replacement and trauma surgery, surgical equipment and navigation systems, endoscopic and communication systems, and numerous other types of medical devices. 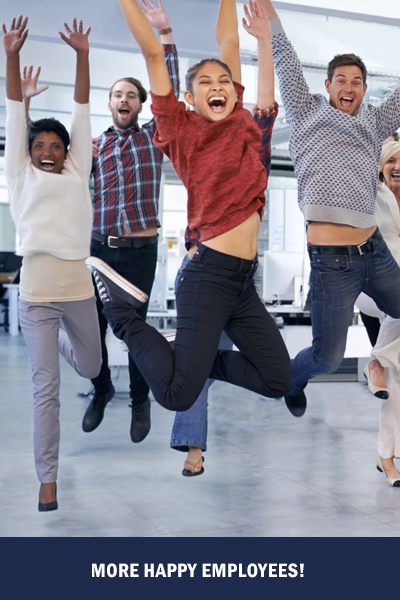 Stryker has three broad business segments: reconstructive, medical and surgical, and neurotechnology and spine. The company has 12,579 staffers in the U.S. It ranked #2 in BioSpace’s Top 5 to Work For. Various perks include 100 percent paid healthcare, health insurance for part-time employees, and telecommuting and job sharing availability.

The Sunday Times ranked Stryker number 32 on its “100 Best Companies to Work For in the U.K.” this year. On Fortune’s list, it ranked number 21. It also ranked fourth out of 15 companies in Manufacturing & Production. And it hit Glassdoor Employees’ Choice Award for the Best Places to Work in 2016, the third year in a row it hit the list.

So the industry is still a great place to work, and although the biotech stock market is having a volatile year, it’s an industry with a lot of growth in general. Big areas for jobs appear to be in biotechnology and biostatistics.

And although the San Francisco Bay Area and Boston are two big hotspots for biotechnology startups, there are a lot of life science clusters around the country, with the other top spots going to Raleigh-Durham, North Carolina, San Diego, New York City, Los Angeles and Orange County, Philadelphia, Long Island, Minneapolis and Seattle.

And great medical sales jobs are spread across the country from San Francisco to Dallas to Phoenix, Indianapolis, and Orlando.

With a degree in hand and an updated resume, the market is wide open for new life science grads with talent and ambition. Good luck!

More Trouble for Theranos as FDA Discovers Company Cut Corners With Zika Te...
We use cookies to ensure that we give you the best experience on our website. If you continue to use this site we will assume that you are happy with it.OK, got itCookies Policy
Scroll to top