You are here: Home1 / News2 / Theranos And 23andMe: Why Medical Startups Are Still Struggling 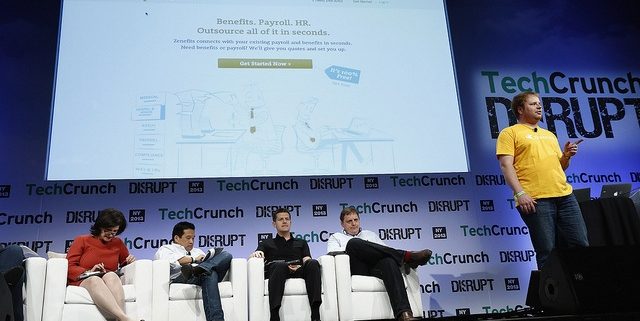 Parker Conrad, founder and former CEO of Zenefits pitches his case at the TechCrunch Disrupt 2013 in New York City.

Startup opportunities seem endless in the digital age. From a website connecting consumers with garage sales in their own cities, to platforms that streamline the way enterprises monitor and manage their cloud infrastructure, the overnight business sensation for which Silicon Valley has come to be known is far from over. Last year, Inc. magazine featured 53 young companies that were due to take the economy by storm. While not all of them made the cut, those that offered concrete but ingenious support for things like data management seemed to fare well. So have companies that offer actionable ideas, like ways to spruce up your interior decor or make great recipes.

What you generally won’t find in this year’s list of blockbuster startups are scores of innovative, break-the-mold healthcare companies. Companies like Theranos, whose minimalist outlook toward blood testing was at one time, touted as the evolutionary stage for a $75 billion industry. Or Zenefits, which reportedly offers easier ways to manage employees’ healthcare benefits. Or the host of do-it-yourself testing companies like 23andme that offer genetic testing by mail. Each one of these models offers the market (either to the consumer to client businesses) a never-before seen approach to a common healthcare demand. And all three of these companies were confident that the path they were carving out for themselves would not only create blockbuster success, but help redefine medicine as we know it.

But would the medical field, and the US regulators be ready for them? 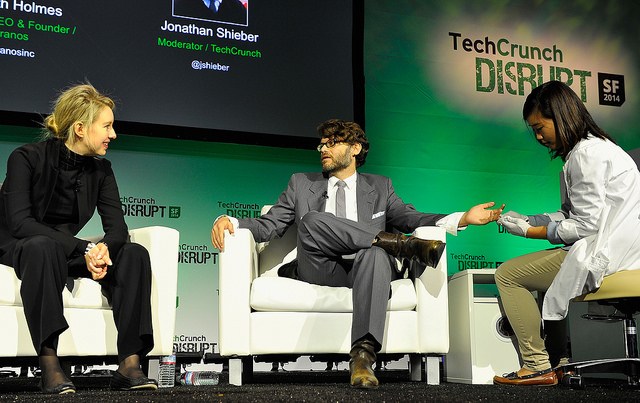 There was a time when Theranos founder Elizabeth Holmes’ vision seemed unassailable. The 19-year-old Stanford dropout founded the company in 2003 with the aim reportedly to democratize healthcare and bring the cost — and the method — of blood testing down to an affordable level. Her aim wasn’t entirely altruistic. Lower cost would mean more people would be willing to be tested for health risks before they became sick. It meant impoverished communities would have quicker access to testing as well as treatment, minimizing the cost of healthcare in general. And it meant a more efficient healthcare industry.

Her vision was to revolutionize the way blood was obtained by developing a method that would extract blood from the finger in small amounts instead of from the arm. To healthcare workers dealing with natural disasters where sterile environments and a full array of testing equipment are rarely available, developing a hand-held device that took blood from the finger, required a smaller sterile field and less patient stress was a long overdue innovation.

For venture capitalists, it was a godsend as well. Valued at $9 billion (there are some who dispute this valuation now), the company touted an almost fail proof concept: lowering blood testing costs by even 0.8 percent could save the healthcare industry almost $100 billion in overhead in the next decade. How could a product like that not work?

For Parker Conrad, Zenefits’ founder and ex-CEO, a cloud-based software company that helps employers navigate the often complex world of human resources management made sense as well. Conrad made his entry into the HR management field in 2013, just as the Affordable Care Act was gaining ground and companies were struggling to understand the regulations.

In the first few years of its very short rise to fame the company investments paid out and paid out well. By 2015, the company’s value had risen to $4.5 billion and its services were gaining a footing in both in California and New York, while expanding across North America.

Genetic research into diseases like Alzheimer’s and Multiple Sclerosis has propelled the growth of companies like 23andMe. With the genetic testing industry slated to grow almost 10 percent in the next five years, a testing system that allows individuals to order a genetic profile by mail made sense to founder Anne Wojcicki.  Instead of driving across town to a lab, clients simply spit into a vial and mail the sample back for analysis.  It’s not hard to see how a testing regimen that can scan for hundreds, if not thousands of genetic mutations could have tremendous revenue potential as genetic research continues to grow. Now in its 10th year, 23andMe has a valuation of $1.1 billion. Small, compared to Theranos and Zenefits, but packed with potential.

Disruptive companies vs. the feds 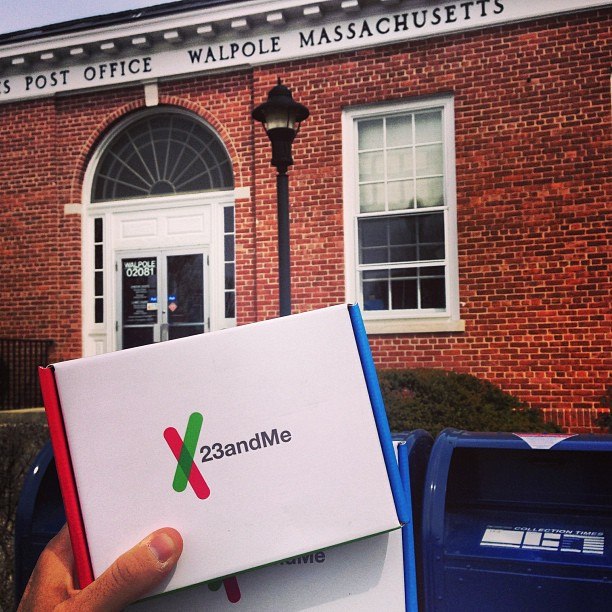 A client prepares to mail off his DNA sample contained in a vial of spittle, to 23andMe.

There’s a reason that successful startups are often coined disruptive companies. They make waves, and they create change.

But what happens when the industry you are attempting to break into is governed by privacy regulations that determine what can and can’t be sent to a patient or client? In November 2013, 23andMe was ordered to discontinue consumer access to its health-related reports due to concerns by the Food and Drug Administration that it hadn’t met regulatory requirements related to medical testing and diagnosis. According to Wojcicki, the issue was due to a mixup, and you can read the company’s official statement here. According to the FDA, it was noncompliance: 23andMe hadn’t met the requirements to operate, and the fact that the company would be issuing detailed test results that could be interpreted as medical advice sent off warning bells for regulators. 23andMe eventually resolved the confusion, but the message was clear: Even startups had to jump through regulatory hoops in order to operate. Even disruptive companies had to meet compliance.

The Theranos story is more complex and circuitous, but arrives at the same conclusion: Companies that challenge the conventional path to success are great for Silicon Valley’s tech industry, but problematic for sectors that delve into more personal arenas like medical testing. In October 2015, Wall Street article reported that Holmes wasn’t being entirely truthful about the accuracy of her products. The investigation included statements from former staff that said Theranos’ labs were practicing unsafely and were skirting federal regulatory procedures. Later that year Theranos announced that the Centers for Medicare and Medicaid Services (CMS) had visited one of its labs and subsequently banned Holmes from operating a medical testing lab for two years. It also imposed a monetary fine of undisclosed amount. Lawsuits from patients saying that they were duped by faulty equipment have been filed as well. It may take Holmes longer than two years to weather the effects of this controversy.

Critics maintain that accuracy and transparency are at the heart of the debate over whether Theranos should be allowed to operate. Advocates of the company — and there are many — maintain that it’s more a fight about industry dollars: what will happen to the wealth of the industry if Holmes does succeed in slashing medical costs. Politics and controversy, one investor acknowledged, are sometimes the bi-product of a successful disruptive company that has the potential to up-end a market.

Still, Holmes does admit that her brand-new technology is still in development stage and may need more tweaking. But the benefits that will emerge from technology that is so small it can take a blood sample from a premature baby the size of your palm, she maintains, is worth fighting for.

When it comes to Zenefits, it’s hard to fathom how a well-respected and fast-growing brokerage firm with a yearly recurring revenue of $100 million could fall from grace so quickly. But by the time Conrad had been forced to resign as CEO, the three-year-old company had already wracked up millions of dollars in state fines and was fighting for its life. Conrad, a programming whiz, had unwisely devised a macro that would allow staff to bypass state training courses that were required in order to gain a broker’s license. The macro effectively allowed 80 percent of its staff to sell insurance packages without being licensed. It also prompted multiple state investigations and nearly forced Zenefits into bankruptcy.

On the surface, it would be easy to blame Zenefits’ fall on hasty decisions and the naive assumption that a startup is somehow exempt from the regulatory demands of the industry. But Zenefits’ early encounters with the state of Utah’s regulatory arm suggests that the company’s real problem was lack of preparation. It assumed that state regulatory agencies would allow the company to market its products. Instead, it found itself locked out of the state of Utah when the state insurance department (incorrectly) labeled its free software as a rebate gimmick, which state law prohibits. The company also didn’t investigate to make sure that state insurance offices across the country would be able to use the software it was offering.

But the real question may be whether federal and state regulatory agencies are prepared for business ventures that promise to deliver in record time and have the venture capital to prove it. Do they have the mechanisms in place to support healthcare enterprises that are out to improve ailing delivery systems and boost technology? With an aging population that is expected to outgrow its younger cohorts in the next four decades, developing state and federal regulatory frameworks that can meet the innovative healthcare companies of tomorrow may be the country’s greatest disruptive challenge.

Patent Reform Needs to Address Trolling of All Stripes

Biotech Billionaire, 23andMe Co-Founder Backs Newly Launched Before Brands,...
We use cookies to ensure that we give you the best experience on our website. If you continue to use this site we will assume that you are happy with it.OK, got itCookies Policy
Scroll to top