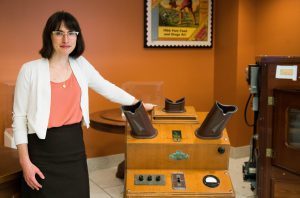 Since the discovery of X-rays in the late 19th century, the technology has enhanced health care in a variety of ways. Like many cutting-edge scientific developments, however, it also has inspired uses of uncertain therapeutic value. That was the case with the shoe-fitting fluoroscope, the subject of the latest episode of FDA’s history video series.

Marketed as a scientific method for optimizing shoe fit, the fluoroscope appeared in shoe stores nationwide from the 1920s to the 1960s. But the machines not only didn’t do what they promised, they also exposed children, their parents, and store clerks to unhealthy doses of radiation.

In the late 1940s, scientists and regulators began to raise serious concerns about the dangerous levels of radiation. Over the next two decades, individual states gradually took action to either ban or restrict the use of the device.

By the 1970s, concerns grew about radiation emitted from common appliances, such as televisions and microwave ovens. And in 1971, FDA was given authority to regulate radiation-emitting devices. The agency continues this oversight, working to protect consumers from harmful novelty devices like the shoe-fitting fluoroscope. FDA also sets standards for medical imaging, surgical and therapeutic equipment, security systems, and consumer products – all for the protection of the health of American consumers.

We hope you enjoy your visit to FDA’s HistoryVault.

Vanessa Burrows is an FDA Historian.

The opinions expressed in this blog post are the author’s only and do not necessarily reflect those of MassDevice.com or its employees.

EnteroMedics jumps pre-market on BarioSurg buyout
We use cookies to ensure that we give you the best experience on our website. If you continue to use this site we will assume that you are happy with it.OK, got itCookies Policy
Scroll to top