Entrepreneurs joined Royal Philips (NYSE:PHG) executives and other players in the medical device industry last week at Philips’ Wearables & Chronic Care Challenge to tout their novel wearable technology and compete for a chance to win $10,000.

It was the second time that Philips has hosted the event, in-line with the two-year anniversary of the company’s connected sensing unit, led by Ravi Kuppuraj.

“We’re almost like a little startup within Philips so we bring that startup mentality and attitude, enthusiasm, speed and lean principles,” he told MassDevice.com.

“Beyond the ICUs and the CCUs, one of the interesting things we found as we talked to our customers was all the challenges and the unmet need in the general wards and general care areas of the hospital,” he said.

General wards are getting more crowded, Kuppuraj explained, and there isn’t always a nurse for every patient. And patients in a general ward are usually mobile, unlike those in the ICU.

After talking with healthcare providers, the connected sensing venture team used a four-pronged process to bring to market a wearable that could be useful in the general ward. They evaluated the patient’s experience, associated outcomes, cost-effectiveness and the caregiver’s experience, eventually landing on a wearable biosensor that can remotely monitor a patient’s vital signs and warn caregivers when it detects signs of deterioration. 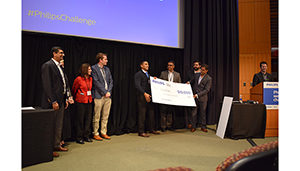 “It’s easy to wear – you just put it on and forget about. It seamlessly and continuously transmits the key vital signs from the patient, wirelessly and continuously to the back-end Philips system, where that data is crunched into some kind of an early warning score,” Kuppuraj said. “And then just when it’s needed, that particular piece of information is then relayed to the nurse or the caregiver on duty.

So it’s a lot less expensive than a monitor, it’s a lot more comfortable for a patient to just wear a sensor and be as normal as they can be in a general ward.”

These factors – patient experience, outcomes, cost and healthcare provider experience – were on the judges’ minds last week as they evaluated pitches from six finalists vying for an investment from Philips.

The groups touted technology ranging from a non-invasive white blood cell monitor to a wearable thermometer. But the finalist that won first place, and the $10,000, was Nanowear – a New York-based company that has created a textile-based, wearable nanosensor designed to help patients manage heart disease.

In December last year, Nanowear won 510(k) clearance from the FDA for its first product, SimplECG. The garment continuously collects multi-channel ECG, heart rate and respiratory rate data and sends it to a web-based portal for review by a physician.

Second place went to Raiing Medical and its iThermonitor, earning the company a $5,000 investment. The company’s wearable thermometer is designed to help parents monitor their child’s fever remotely using a mobile app.

Third place was a tie between Bold Diagnostics, a group with a wearable diagnostic for hypertension, and Leuko Labs, which has created a wearable white blood cell monitor.

Surgeon sues J&J’s DePuy in royalties dispute
We use cookies to ensure that we give you the best experience on our website. If you continue to use this site we will assume that you are happy with it.OK, got itCookies Policy
Scroll to top