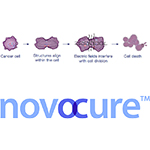 NovoCure priced its initial public offering today, saying it looks to raise $165 million by floating 7.5 million shares at $22 a piece.

The company said it is also offering a 30-day underwriters option for an additional 1.1 million shares. NovoCure shares are slated to trade on the NASDAQ Global Select Market under the symbol “NVCR”.

Last month, Novocure set the terms on its initial public offering, saying it hoped to float 7.5 million shares at $26 to $29 apiece, or $206.3 million at the midpoint of the range.

NovoCure originally estimated that the IPO could fetch as much as $300 million. The company, which is based on Jersey, an island in the English Channel, makes a tumor-zapping device called Optune and is waiting on a decision from the FDA on a new indication for the device.

The federal safety watchdog granted pre-market approval for Optune in April 2011 for adult patients with glioblastoma whose cancer recurred after chemotherapy. Last April, the company applied for another indication, newly diagnosed glioblastoma, under priority review from the FDA.

“Upon FDA approval of Optune for newly diagnosed GBM, we believe TTFields will transform the standard of care for patients with newly diagnosed and recurrent GBM,” NovoCure said in its IPO filing, noting that a Phase III pivotal trial was halted early after it met its endpoints after showing “significant improvements in both progression-free and overall survival” in GBM patients. More than 1,600 patients have been treated using Optune, the company said.

NovoCure said it has clinical programs in place for other types of cancer, including metastases, pancreatic, ovarian, mesothelioma and advanced non-small cell lung cancer.

You???ve Got the Job Interview, Now What?

MD Anderson Cancer Center and Theraclone Launch New Immuno-Oncology Company...
We use cookies to ensure that we give you the best experience on our website. If you continue to use this site we will assume that you are happy with it.OK, got itCookies Policy
Scroll to top