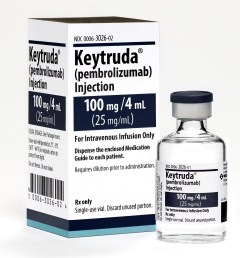 Both OS and PFS were defined to be the dual primary endpoints of the pivotal late-stage trial dubbed KEYNOTE-189.

The trial assessed the combination of Keytruda, Lilly’s pemetrexed and platinum chemotherapy made up of cisplatin or carboplatin as a first-line treatment of patients with metastatic non-squamous non-small cell lung cancer (NSCLC).

The Keytruda regimen was evaluated in comparison to pemetrexed and cisplatin or carboplatin alone in 614 NSCLC patients, regardless of PD-L1 expression.

Merck said that the safety profile of Keytruda in the combination was on par with previous observations.

Merck plans to present the KEYNOTE-189 results at an upcoming medical meeting and also submit them to regulatory authorities.

According to Merck, Keytruda, to be injected intravenously, improves the immune system’s ability in identifying and fighting tumor cells.

The anti-PD-1 therapy is a humanized monoclonal antibody which inhibits the interaction between PD-1 and its ligands, PD-L1 and PD-L2. As a result, Keytruda therapy activates T lymphocytes which may affect tumor cells and also healthy cells.

Keytruda has been approved in the US and Europe for different forms of cancers.

Its approvals include its indication in the US as a single agent for the first-line treatment of certain type of NSCLC patients, whose tumors have high PD-L1 expression.

In Europe, Merck had withdrawn an application in October 2017, seeking the approval Keytruda in combination with pemetrexed and carboplatin (pem/carbo) as a first-line treatment for NSCLC.

Shire’s haemophilia A drug Adynovi secures approval in Europe
We use cookies to ensure that we give you the best experience on our website. If you continue to use this site we will assume that you are happy with it.OK, got itCookies Policy
Scroll to top