Hardest hit last year were hotels, restaurants and related industries, driving up unemployment among minorities, the young and less educated workers—groups already disproportionately hit by the economic effects of the coronavirus.

Unemployment rates among those groups shot up in April, after the pandemic hit, and then started to decline. Then, cold December weather triggered another big increase in joblessness. 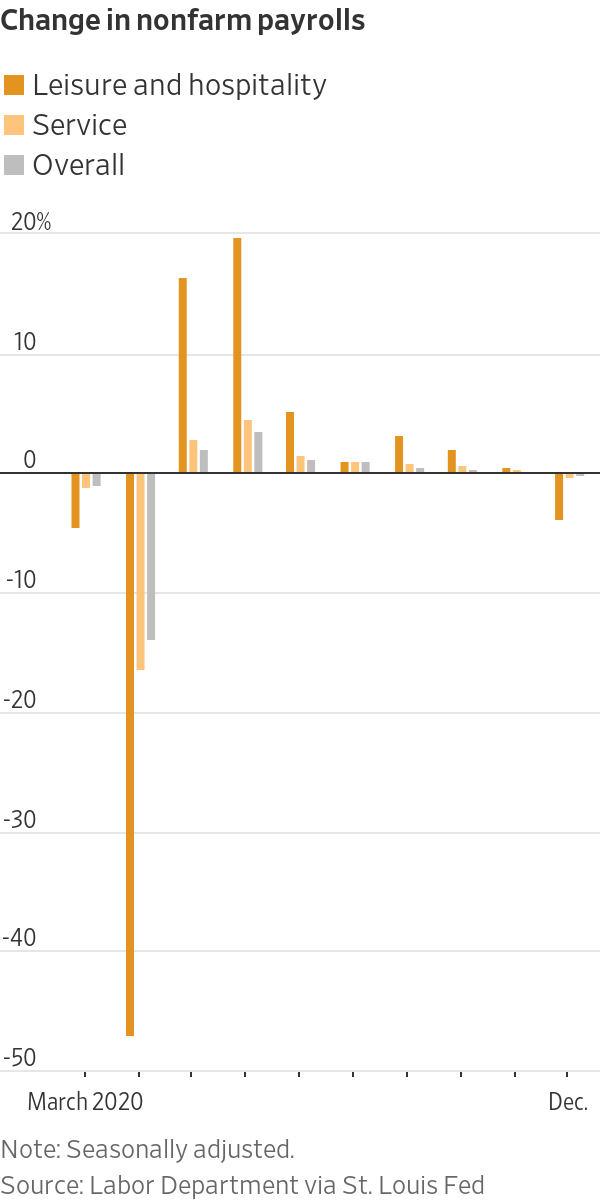 December’s 140,000 drop in payrolls was the first since April. But unlike in April, December’s job losses were concentrated in the leisure and hospitality industries, said

“It’s a slightly different situation where the pain is far more concentrated among those teenage workers and minorities in restaurants and bars and other face-to-face service industries,” Ms. Pollak said. Unemployment among Black and Hispanic workers has significantly exceeded the national average throughout the pandemic. In December, the rate for Hispanics rose to 9.3% from 8.4% a month earlier. Hispanics accounted for about 18% of all workers and 28% of food-preparation workers in 2019.

The jobless rate for Black workers ticked down last month but remained higher than it was for any other racial group. Before the coronavirus hit, the Black unemployment rate, at 6% in February 2020, was near the lowest since records began. It nearly tripled to 16.7% in May, as many African-Americans were more likely to work in jobs that can’t be done remotely. A surge in coronavirus cases across the country triggered 372,000 job cuts at restaurants and bars in December as many states and localities tightened restrictions. That also hurt job prospects for teenagers, since restaurant roles are “sort of a natural home for young workers,” Ms. Pollak said. “It’s their first rung on the ladder really into employment.”

Winter restaurant closures also helped drive the increase in temporary layoffs. About 3 million Americans last month said their layoff was temporary, up from 2.8 million in November. Meanwhile, the number considering their layoff to be permanent fell.

Live longer if you move 11 minutes a day. Here's how to get going

We tested 11 top-rated shower heads: These 4 won us over
Scroll to top