You are here: Home1 / News2 / Developments in Nanobiotechnology Point to Medical Applications, University... 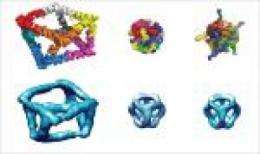 Two new groundbreaking scientific papers by researchers at UC Santa Barbara demonstrate the synthesis of nanosize biological particles with the potential to fight cancer and other illnesses. The studies introduce new approaches that are considered “green” nanobiotechnology because they use no artificial compounds.

Luc Jaeger, associate professor of chemistry and biochemistry at UCSB, explained that there is nothing short of a revolution going on in his field — one that permeates all areas of biochemistry, especially his area of nanobiotechnology. The revolution involves understanding the role of RNA in cells.

“Considering the fact that up to 90 percent of the human genome is transcribed into RNA, it becomes clear that RNA is one of the most important biopolymers on which life is based,” said Jaeger. “We are still far from understanding all the tremendous implications of RNA in living cells.”

Jaeger’s team is putting together complex three-dimensional RNA molecules — nanosize polyhedrons that could be used to fight disease. The molecules self assemble into the new shapes. The work is funded by the National Institutes of Health (NIH), and there is a patent pending jointly between NIH and UCSB on the new designs.

“We are interested in using RNA assemblies to deliver silencing RNAs and therapeutic RNA aptamers to target cancer and other diseases,” said Jaeger. “It is clear that RNA is involved in a huge number of key processes that are related to health issues.”

Jaeger believes the RNA-based approaches to delivering new therapies in the body will be safer than those using artificial compounds that might have undesirable side effects down the line.

“By using RNA molecules as our primary medium, we are practicing ‘green’ nanobiotechnology,” explained Jaeger. “The research program developed in my lab at UCSB aims at contributing in a positive way to medicine and synthetic biology. We try to avoid any approaches that raise controversial bioethical issues in the public square. It’s not an easy task, but I am convinced that it will pay off in the long run.”

The more recent of the two scientific papers describing the new work — “In vitro assembly of cubic RNA-based scaffolds designed in silicon” — published online Monday, August 30, by Nature Nanotechnology. The earlier paper — “A polyhedron made of tRNAs” by Severcan and colleagues — was published online on July 18 by Nature Chemistry. The print edition of this article will be published in Nature Chemistry’s September issue.

Pluristem Therapeutics Sees Positive Result for Stem Cell Therapy
We use cookies to ensure that we give you the best experience on our website. If you continue to use this site we will assume that you are happy with it.OK, got itCookies Policy
Scroll to top