You are here: Home1 / Paul Ryan 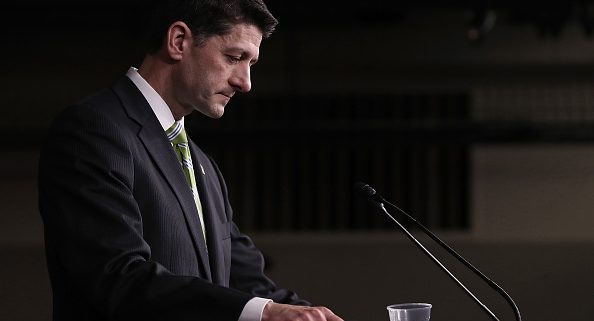 U.S. Speaker of the House Paul Ryan answers questions at a press conference at the U.S. Capitol after President Trump’s healthcare bill was pulled from the floor of the House of Representatives. (Photo by Win McNamee/Getty Images)

Despite days of intense negotiations and last-minute concessions to win over wavering GOP conservatives and moderates, House Republican leaders Friday failed to secure enough support to pass their plan to repeal and replace the Affordable Care Act.

House Speaker Paul Ryan pulled the bill from consideration after he rushed to the White House to tell President Donald Trump that there weren’t the 216 votes necessary for passage.

“We came really close today, but we came up short,” he told reporters at a hastily called news conference.

When pressed about what happens to the federal health law, he added, “We’re going to be living with Obamacare for the foreseeable future.”

Ryan originally had hoped to hold a floor vote on the measure Thursday — timed to coincide with the seventh anniversary of the ACA — but decided to delay that effort because GOP leaders didn’t have enough “yes” votes. The House had been in session Friday while members debated parts of the bill.

The legislation was damaged by a variety of issues raised by competing factions of the party. Many members were spooked by reports by the Congressional Budget Office showing that the bill would lead eventually to 24 million people losing insurance, while some moderate Republicans worried that ending the ACA’s Medicaid expansion would hurt low-income Americans.

At the same time, conservatives, especially the hard-right House Freedom Caucus that often has needled party leaders, complained that the bill kept too much of the ACA structure in place. They wanted a straight repeal of Obamacare, but party leaders said that couldn’t pass the Senate, where Republicans don’t have enough votes to stop a filibuster. So they chose to use a complicated legislative strategy called budget reconciliation that would allow them to repeal only parts of the ACA that affect federal spending.

The decision came after a chaotic week of negotiations, as party leaders sought to woo more conservatives. Trump personally lobbied 120 members through personal meetings or phone calls, according to a count provided Friday by his spokesman, Sean Spicer. “The president and the team here have left everything on the field,” Spicer said.

On Thursday evening, Trump dispatched Office of Management and Development Director Mick Mulvaney to tell his former House GOP colleagues that the president wanted a vote on Friday. It was time to move on to other priorities, including tax reform, he told House Republicans.

“He said the president needs this, the president has said he wants a vote tomorrow, up or down. If for any reason it goes down, we’re just going to move forward with additional parts of his agenda. This is our moment in time,” Rep. Chris Collins (R-New York), a loyal Trump ally, told reporters late Thursday. “If it doesn’t pass, we’re moving beyond health care. … We are done negotiating.”

“Anytime you don’t have 216 votes, negotiations are not totally over,” he told reporters who had surrounded him in a Capitol basement hallway as he headed into the party’s caucus meeting.

Shortly before Ryan’s press conference, Trump called Washington Post reporter Robert Costa to say they were pulling the bill back from consideration. Costa said the president seemed at ease with the decision and did not blame Ryan for the defeat.

Trump, Ryan and other GOP lawmakers tweaked their initial package in a variety of ways to win over both conservatives and moderates. But every time one change was made to win votes in one camp, it repelled support in another.

The White House on Thursday accepted conservatives’ demands that the legislation strip federal guarantees of essential health benefits in insurance policies. But that was another problem for moderates, and Democrats suggested the provision would not survive in the Senate.

Republican moderates in the House — as well as the Senate — objected to the bill’s provisions that would shift Medicaid from an open-ended entitlement to a set amount of funding for states that would also give governors and state lawmakers more flexibility over the program. Moderates also were concerned that the package’s tax credits would not be generous enough to help older Americans — who could be charged five times more for coverage than their younger counterparts — afford coverage.

The House package also lost the support of key GOP allies, including the Club for Growth and Heritage Action. Physician, patient and hospital groups also opposed it.

It’s not clear what will happen next to the Republican effort to overturn or modify Obamacare. But White House officials told members Thursday that if they couldn’t pass the legislation, the president wanted to turn to other priorities, including tax reform. “The president understands this is it,” Spicer said. “We had this opportunity to — to change the trajectory of health care, to help improve — put a health care system in place and to end the nightmare that Republicans have campaigned on called Obamacare.”