You are here: Home1 / #patentsmatter

There has been no shortage of commentary related to the efforts of Allergan to shield itself from the un-American threat of double jeopardy they have repeatedly faced through gamesmanship of the PTO’s Inter Partes Review (IPR) process.

An op-ed by Allergan CEO Brent Saunders today in The Wall Street Journal demonstrates the unconventional steps the company has taken to protect itself from the flaws of IPR that are being “exploited by generic manufacturers and a new breed of reverse trolls.”

Generic pharmaceutical manufacturers, who already have full opportunities to challenge innovator patents in federal court, are using these flaws within IPR to initiate duplicative patent reviews until a sympathetic panel of PTO Administrative Patent Judges renders a decision to invalidate. In the process, they – not Allergan – are undermining the carefully balanced, Congressionally-mandated system that has successfully spurred both innovation and generic drug entry for decades.

IPR undermines the long-established, bi-partisan Hatch-Waxman framework that allows for legitimate patent questions to be litigated in the open in federal court.

To remedy the abuses of IPR, BIO has been calling on Congress for several years to harmonize the legal standards used in IPR and in the federal courts, and provide assurance that patent owners will be free of repeated threats to their intellectual property following a court ruling. 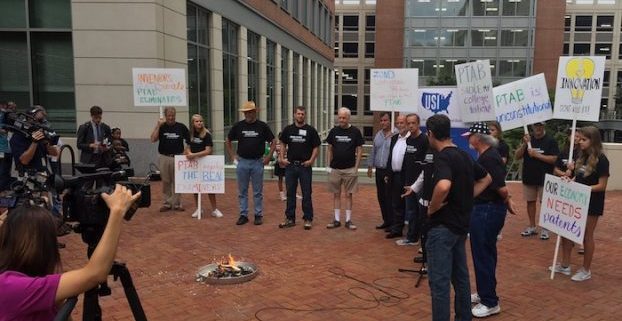 As reported last week by IP Watchdog, the United States Patent and Trademark Office (PTO) refused to approve a permit requested by US Inventor for booth or table space within the Agency’s office building  in Alexandra, VA. The group’s objective was to  protest and raise awareness of the ongoing high rates of patent invalidation resulting from decisions made by the Patent Trial and Appeal Board (PTAB).

Despite two denied appeals, US Inventor, a nonprofit organization devoted to improving the U.S. patent system, was undeterred. They opted to set up on the sidewalk outside the PTO. Some of the protestors went so far as to burn their actual patents, citing PTO policies had rendered them worthless.

The PTO’s interim director Joe Matal came out to speak with and listen to members of the group as they expressed their concerns with the PTAB.

Patents burn at US Inventor PTAB protest at the USPTO, Friday, August 11, 2017. Photo taken by @TheRealMattDowd.

The unintended consequences of the PTAB’s administrative patent challenge system known as Inter Partes Review, or IPR, have caused much concern among innovative, intellectual property-reliant companies that are helping to drive this nation’s economic growth. Rather than being a cheaper substitute for expensive district court litigation, these proceedings have produced more litigation, not less, and have perpetuated disputes rather than resolving them sooner.

BIO stands ready to work with Congress and the PTO on efforts to reform the patent system, to ensure better support for inventors, investors, and the people waiting for new biotech innovations treatments to improve their lives and their environment.