The Real Immersive System is an immersive virtual reality and display system that tracks upper extremity rehabilitation exercises for adults who have symptoms related to acute pain, cerebral palsy, stroke, orthopedic or neurodegenerative diseases. The exercise routines with the Real Immersive System are designed to be done in a seated position in a clinical environment, according to Penumbra.

The system features a clinician tablet, head-mounted display component, small sensors, large sensor, sensor charger, router, router battery, HMD controller, power cords and USB cables. The small and large sensors have mechanical and electrical components that can measure motion and direction in the physical space and then translate that information into a virtual environment. 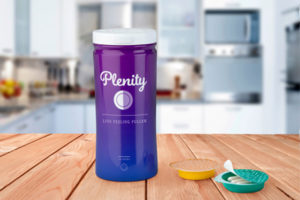 The drug is a weight management aid for adults who have a body mass index of 25-40 kg/m2 and is supposed to be used with diet and exercise. It can be used in people with and without comorbidities like hypertension, type 2 diabetes or dyslipidemia. The company says that there is no restriction on how long the drug can be used in weight management.

“This FDA clearance is a major milestone for the Gelesis team and our technology, and we are thrilled to be able to bring this new prescription product to the millions of people looking for a safe, validated and convenient treatment option to manage their weight without surgery or stimulants,” Yishai Zohar, founder and CEO of Gelesis, said in a press release. “With Plenity, Gelesis is introducing a completely new approach with a unique mechanism of action to aid in weight management, with efficacy and safety supported by positive data from large clinical studies.”

The Oakland, N.J.-based company said that the newly cleared OssiMend product is composed of anorganic carbonate apatite bone mineral, 45S5 bioactive glass and highly purified Type I collagen, and that it can be molded into putty for filling irregular defect sites.

The moldable Ossimend product is designed to be slowly resorbed and replaced by new bone tissue, and comes in various sizes, Collagen Matrix said.

“We continue to expand our product portfolio for the Spine market with the development of this unique line of Bioactive bone graft matrices that combines a carefully-selected ratio of three powerful components. This innovative moldable version offers surgeons options for better ensuring predictable outcomes,” CEO Bart Doedens said in a press release.

The Eden Prairie, Minn.-based company said that the EnVisio navigation system is designed for use in conjunction with the company’s SmartClip soft tissue marker during breast cancer procedures.

The SmartClip soft tissue marker is an alternative to hook-wire localization procedures used to identify malignant tissue for removal, the company said. When used with the Envisio system allows physicians to mark difficult lesions and navigate distances, depths and directions in real-time 3D during breast cancer procedures.

“Elucent Medical is offering a cost-effective solution that addresses a key challenge for breast surgeons: how to easily find the location of a malignant biopsy during surgery, especially in tissue that lacks anatomical landmarks. We developed a system designed by surgeons to be intuitive, efficient, and precise, eliminating the need for a localization procedure. We believe this innovation has the potential to improve cosmetic and clinical outcomes, with other possible applications for lymph and thoracic surgeries,” co-founder Dr. Lee Wilke said in a press release.

“Our vision is to disrupt the standard of care for women who receive localization prior to their lumpectomy as part of their breast cancer treatment. Today we take a significant step toward achieving this goal. The EnVisio Navigation System and SmartClip Soft Tissue Markers will provide patients and surgeons with a wire-free, minimally invasive alternative for pre-surgical planning and navigation throughout surgery,” co-founder and CEO Laura King said in a prepared statement.

The newly cleared system is intended for use in triaging cases of CO poisoning as it provides instant results at the point-of-care, the Maidstone, UK-based company said.

Samples can be taken via a low-cost mouth piece or a face mask option for patients who are either unconscious or injured, the company said. The system also automatically samples the ambient air and alarms when CO in the environment reaches a harmful level.

“Not only can our breath analysis monitor help to evaluate patients quickly and effectively for CO poisoning, but it can also reduce emergency department visits and hospitalizations. We are thrilled with the FDA approval of the ToxCO; we believe it will be game-changer for healthcare personnel in America,” managing director Jason Smith said in a press release.

Bedfont said that it has already inked an exclusive U.S. distribution deal with CoVita.

“The ToxCO will be a useful tool for healthcare professionals such as paramedics in Firefighter Rehab. We believe it will fundamentally change how people are assessed for CO poisoning in the United States,” CoVita prez Jason Aversano said in a prepared statement.

The Alpharetta, Ga.-based company said that the new ON-Q* with Bolus system features improvements to improve ease of use and reduce postoperative opioid use for pain management.

The study, however, did not meet its primary efficacy endpoint, a comparison of the proportion of subjects with a greater than or equal to 1-score improvement on the Fitzpatrick Wrinkle and Elastosis Scale at 3-months. The company hoped to achieve a 75% success rate, but only 62% of subjects showed an improvement of 1 or more on the scale.

Apyx Medical said that in reviewing the submission, the FDA had concerns over clinical results from one investigational center being superior to the other two centers in the study. The federal watchdog was also concerned about the potential impact of protocol deviations at the superior center which included the prophylactic use of methylprednisolone in all but 5 subjects.

“The IDE study results show good progress towards being able to eventually demonstrate the efficacy of our Renuvion cosmetic technology as more than 90% of subjects in the study experienced an improvement in appearance as assessed by investigators, and the independent photographic reviewers were able to correctly identify post treatment photographs in more than 97% of subjects. Unfortunately, we experienced a larger than expected range of clinical outcomes in the study due primarily to the inconsistent application of treatment time on tissue among investigators at the three centers,” R&D VP Shawn Roman said in a prepared statement.

The company said that it does not have a timeline for resubmission, but that it intends to resubmit after further discussions with the FDA.

“We have been involved in productive and positive interactions with the agency and they have been very engaged throughout the process. They were understandably focused on the performance versus our stated primary endpoint, the variability in treatment outcomes across the three centers and the protocol deviations identified at one investigational center. After consultation with the agency in late-March, we withdrew our application on March 29, 2019 as we were unlikely to be able to resolve the issues raised within the agency’s congressionally mandated MDUFA 90-day review period that would have otherwise ended on April 1, 2019. Apyx Medical is committed to collaborating with the agency to gain a better understanding of their concerns, which the company plans to address in a new IDE supplement to obtain further data with uniform treatment applications across all investigational sites to support a new 510(k) regulatory clearance to market and sell Renuvion cosmetic technology for dermal resurfacing procedures. We are actively engaged with the agency to determine what additional data, studies and analyses may be required to support a new submission and an indication for use in dermal resurfacing procedures. In the interim, we continue to focus our 2019 commercial efforts on our initial clinical indication in the U.S. cosmetic surgery market, where Renuvion is used as a subdermal coagulator. With more than 400,000 liposuction procedures performed in the U.S. each year, this represents a compelling annual addressable market opportunity of more than $170 million,” prez & CEO Charlie Goodwin said in a press release.

With the new clearance, the Latham, N.Y.-based company’s OARtrac system is cleared for use with patient-specific, pre-calibrated Plastic Scintillating Detector sensors used during cancer treatments to monitor photon and electron radiation therapy as an adjunct to treatment planning.

AngioDynamics’ OARtrac system is designed to enable the measurement and validation of targeted radiation doses to improve accuracy and allow for more informed dosing.

“This expanded clearance provides us the opportunity to address an unmet need for patients in three of the most common types of radiation therapy, allowing for significantly improved outcomes. OARtrac is the type of disruptive technology that our customers value, and our team will continue to focus on creating additional pathways to help clinicians deliver the best possible treatment for their patients,” oncology senior VP Brent Boucher said in a press release.

The new indication adds to previous clearance which cleared the device for use in the real-time monitoring and measurement of photon radiation and high dose rate brachytherapy during cancer treatments on the skin surface and with endorectal balloon applications, AngioDynamics said. The system is also cleared for use with photon and electron energy.

Genetesis said that the CardioFlux uses a next-gen version of magnetocardiography that eliminates the need for liquid helium cooling, which had previously served as an obstacle to the wide-scale commercial adoption of MCG. Data from the CardioFlux is sent securely to the Faraday Analytical Cloud where it can be reviewed by physicians.

“These are major steps forward by the team at Genetesis. Achieving these clinical and commercial milestones enables delivery of an end-to-end medical device and cloud computing platform focused on improving patient care and reducing costs,” board chair John Rice said in a prepared release.

The company said that it recently presented an investigational study using a prototype of the device at the American College Emergency Physicians 2018 Scientific Assembly.

“Throughout the study it became evident that there is great potential for magnetocardiography and CardioFlux to positively impact the clinical workflow of patients presenting to the ED with chest pain or anginal equivalents, which represent nearly 10 million emergency room visits a year,” study presenter Dr. Margarita Pena of Ascension St. John Hospital said in a prepared statement.

The Rad-67 offers both Rainbow non-invasive hemoglobin measurement and measure-through motion and low perfusion SET pulse oximetry, and can be used with the Irvine, Calif.-based company’s Rainbow DCI-mini sensor for spot-check monitoring.

The system also features a rechargeable battery with a six-hour run time and a high-resolution color display with touchscreen navigation.

Masimo said that the combination of spot-check monitoring measurements of both oxygen saturation and non-invasive hemoglobin makes it viable as a single-device solution in clinical and non-clinical settings.

“The Rad-67 is incredibly easy to use and gives a quick result, perfect in our busy pre-operative clinic. We have found it particularly useful as it helps us target those patients who may need further testing,” Dr. Andrew Klein of Cambridge, U.K.’s Royal Papworth Hospital said in a press release.

The company clarified that the Rad-67 spot-check SpHb monitoring is not cleared for pediatric patients, pregnant patients or patients with renal disease, and that it is not intended to replace laboratory blood testing.

“We’re proud to launch Rad-67, Spot-check next generation SpHb monitoring, and the rainbow DCI-mini in the United States. Spot-check Next Generation SpHb monitoring represents a significant enhancement to the noninvasive measurement we invented a decade ago – a measurement we look forward to continuing to improve,” founder & CEO Joe Kiani said in a prepared statement.

Earlier this month, Masimo said that it won CE Mark approval in the European Union for its next-gen SedLine brain function monitor intended for pediatric patients.