You are here: Home1 / 21st Century Cures Act2 / Biden at AACR: “What a difference a year makes” 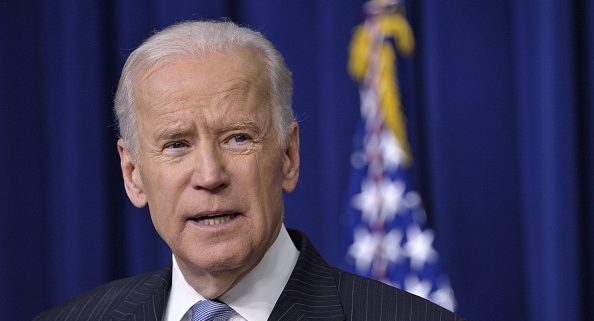 “What a difference a year makes,” he said in his opening remarks, streamed live by AACR.

Some 15 months after the Cancer Moonshot’s launch and one year after his first AACR keynote speech, there was a lot to report back to the Washington, D.C., crowd. What a difference a year makes, indeed.

Biden is not the leader of the cancer moonshot. He’s the inspiration.

“Look, I don’t have the answers,” he said. “But you all possess the potential to generate these answers.”

Trained as a lawyer, Biden educated himself about cancer after his son, Beau, was diagnosed with a brain tumor. He later passed away. That experience didn’t give him the expertise to navigate medicine’s way to a cure. It made him passionate about it, in a way that he can serve as a focal point for the necessary people to come together.

Silicon Valley showed up, politicians on both sides of the aisle, and Nobel laureates.

“I got a call from the chairman of the board of IBM,” Biden said. “Did I want Watson, the supercomputer, to partner with the department of defense and the VA?”

With unprecedented data sharing and collaboration, the National Cancer Institutes launched the Genomic Data Commons to pool the information garnered through The Cancer Genome Atlas (TCGA), a database of 14,000 individuals’ genomic and health records. It has now expanded to 30,000 genomes.

Amazon called, Biden said, and agreed to open its cloud-computing platform for scientists using these massive databases. Since June, the data has been accessed 80 million times by researchers around the world.

Public support has been overwhelming. There is hope once again.

“You’ve lighted a fire under the public,” he said. “They’re beginning to believe again.”

“For decades, we thought we could tackle cancer one discipline at a time,” Biden told the audience of cancer experts.

It’s not enough. Cancer uses every tool, system, and pathway at its disposal. The science community needs to meet each of those mechanisms head on, by uniting immunologists, virologists, geneticists, data scientists, chemical, biological and computer engineers and more. That’s happening, Biden said. The age of individual achievements in science is over.

Since its launch, the Cancer Moonshot has seeded at least 80 new collaborations. Many government-related projects have begun, he said, bringing together unlikely partnerships between the likes of NASA and the Department of Veterans Affairs.

In December, Congress passed the 21st Century Cures Act, which authorized an additional $6.3 billion in funding over seven years for health-related research, including $1.8 billion earmarked for cancer specifically.

Biden had the privilege to preside over the Cures Act, he said, which achieved remarkable bipartisan support.

With the passing of the Act, Republican Senator Mitch McConnell stood up to propose that the cancer initiative takes the name of Biden’s late son. The Beau Biden Cancer Moonshot.

“Those things don’t happen very much these days,” he recalled with a lot of emotion in his voice. “There is genuine, genuine bipartisan support.”

By this stage, the speech was starting to speak to something much more than the Cancer Moonshot. Late in the Obama administration, both sides had come together to pass something worthwhile.

“This is what [the American people] expect their government to do,” Biden said.

Oh, what a difference a year makes.

One year on, President Trump has taken the White House and is outlining major cuts to the NIH, the EPA — to the entire scientific field.

“The message sent out a few weeks ago in the President’s budget is counter to this hope and the progress we’ve made,” the 47th vice president of the United States told the audience.

He didn’t hold back.

“On the cusp of saving and extending lives for Americans, the President of the United States is not only not doubling-down on our investment, he’s proposing Draconian cuts.”

Funding would be set back 15 years, Biden said. By one estimate, new grant funding would be cut by 90 percent, given the multi-year commitments that the NIH has already made.

The ex-VP doesn’t believe the budget blueprint will pass Congress. However, the message it sends has already done a world of harm, communicating that science is not valued or worthy in the United States.

What a difference a year makes.

For Biden, the Cancer Moonshot was always about two things. It needed to inject urgency into the biomedical march towards a cure while also shifting the culture towards more collaboration, passion, and hope.

“You can not turn back the clock,” he said.

Not on his watch anyway.

Japan’s Astellas agrees to acquire Belgian firm Ogeda for EUR800m
We use cookies to ensure that we give you the best experience on our website. If you continue to use this site we will assume that you are happy with it.OK, got itCookies Policy
Scroll to top