The Advanced Medical Technology Assn. is unleashing the latest ad in a social media campaign aimed at winning more legislative support for a repeal of the medical device tax, hoping to sway Congress members during the August recess.

The apparent demise last month of Republican plans to repeal Obamacare and replace it with their own version of healthcare reform, which would have done away with the medtech tax, has the industry casting about for another vehicle to latch on to.

The 2.3% levy was imposed on U.S. medical device sales by the Affordable Care Act in 2013. During the three years it was in effect (a two-year moratorium went into effect at the beginning of last year), the tax brought in $5.3 billion, well short of the $8.7 billion it was expected to bring in to IRS coffers. Repealing the tax is predicted to cut nearly $20 billion in revenues from the federal budget from 2018 to 2026.

Now AdvaMed is aiming to up the public pressure on legislators who have yet to sign on to the repeal push, which enjoys bipartisan support in both chambers. The social media campaign, under the #repealdevicetax hashtag on Twitter, features ads highlighting the industry’s positive impact on public health, jobs and the economy.

The new ad is slated to run from August 14 through Labor Day in 15 states, a spokesman for the lobby told MassDevice.com today via email. It aims to influence senators and representatives in states with large medtech clusters including California, Indiana, Massachusetts, Michigan and Minnesota.

“Our goal is to ensure repeal remains top of the priority list through recess. We’re calling this phase, ‘It’s Time,’ because, in the wake of the fight over ACA, it’s time to get some clear economic and health policy wins such as full repeal on the books,” the spokesman told us. 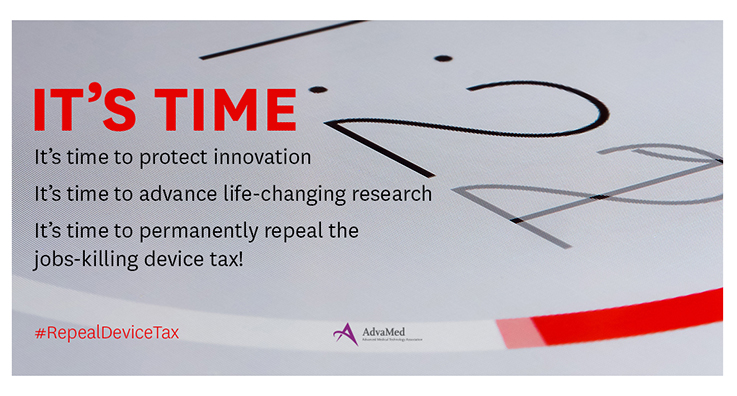 “It’s time to put innovation first. Thousands of companies face a massive, billion-dollar tax increase in a matter of months. We know full repeal can make it across the finish line and become law, so it’s time to do something about that when Congress returns,” AdvaMed CEO Scott Whitaker added in prepared remarks.

The latest repeal campaign is nothing new for AdvaMed, which has been running anti-medtech tax ads since at least early 2016 on Twitter.

“Between 2000 and 2014, medical advancements helped reduce fatalities from heart disease by 35%,” reads another.

Emphasizing the “real-world impact” of the tax, another asserts that resumption of the tax next year “threatens to stall” companies’ planned innovations.

“Congress, it’s time to permanently repeal the medical device tax: for jobs, for innovation, for patients,” according to the Twitter campaign.

Although the Senate recently voted to approve the FDA user fee bill without including any repeal language, the medtech industry hopes to tack the measure onto any of a number of upcoming legislative pushes. Candidates include reauthorizing the Children’s Health Insurance Program, an omnibus budget bill expected next year and the next item on the agend: Reforming the tax code.

Last month Whitaker told media outlets that he’s “frustrated” by Washington’s inability to act, saying the lobby is prepared to “pivot to any moving vehicle.”

“We’re not going to give up,” he told Modern Healthcare.

“The medtech industry is frustrated, because if Congress doesn’t do something, a tax increase is looming,” he said to the Minneapolis Star Tribune.

“While we’d be grateful for anything beyond a tax increase,” he told the newspaper, “that’s not the right health policy or tax policy solution.”

Neuromod dev NeoSync raises $13m in Series D
We use cookies to ensure that we give you the best experience on our website. If you continue to use this site we will assume that you are happy with it.OK, got itCookies Policy
Scroll to top