You are here: Home1 / Daily2 / 65 percent of healthcare organizations have documented mobile strategy 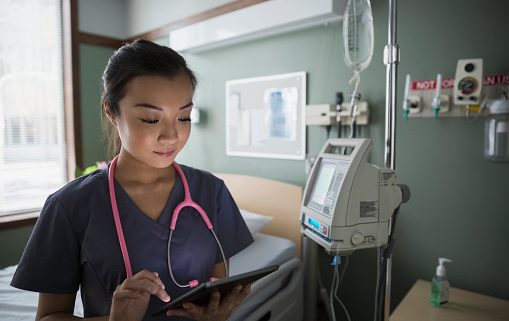 The rise of technology in healthcare is causing many organizations to implement a mobile strategy.

This finding comes from part one of a two-part Spok report. Titled “The Evolution of Mobile Strategies in Healthcare,” part one highlights a number of key points in Spok’s annual survey. The survey results include responses from more than 300 U.S. healthcare professionals, which were gathered in February 2017. Thirty-five percent of respondents held various hospital roles such as quality directors, risk managers, infection prevention specialists and mobility engineers. Another 22 percent of respondents were physicians, 13 percent were nurses, 10 percent were IT staff members and 7 percent were executive leaders.

All the respondents answered questions about their organization’s mobile strategy — though their responses regarding the definition of “mobile strategy” varied across the board. For simplicity’s sake, Spok defined a mobile strategy as something that “brings together elements of security, technology and communications in a collective plan to improve staff productivity and enhance patient care.”

Among the organizations that have had a mobile strategy in place for more than a year, many have updated their strategy since its initial creation. According to respondents, the update stemmed from reasons such as the changing needs of end users, the availability of new mobile devices, new capabilities from their EHR vendor and alterations to strategy goals. Twenty-three percent of respondents said they were unsure of any updates to the strategy, and 7 percent said their organization has not updated its strategy.

But the implementation of a mobile strategy isn’t the only important factor.

Anti-aging tech trends you need to know about
We use cookies to ensure that we give you the best experience on our website. If you continue to use this site we will assume that you are happy with it.OK, got itCookies Policy
Scroll to top