You are here: Home1 / News2 / 54% of CFOs Offer Job Candidates More Money Than The Last Boss

February 11, 2016
By Robert Half, Consulting Agency

Companies are willing to pay a premium for top talent today, new research shows. More than half (54 percent) of chief financial officers (CFOs) interviewed for a Robert Half survey said they increased new hires’ starting salaries from what they made in their previous job. The average increase, according to financial executives, was 10 percent.

“Employers who want to improve their odds of securing skilled talent are offering highly attractive starting salaries right now,” said Paul McDonald, senior executive director for Robert Half. “Companies are competing not just with other businesses that are hiring but also with the applicant’s current employer, who may make a counteroffer to retain the services of a valued employee.” View an infographic of the survey findings.

CFOs who hired new staff in the past year were asked, “Compared to what your new hires earned at their previous employer, on average, did you increase or decrease their starting salaries?” Their responses:

When asked how the pay increase compared to what they offered two years ago, 68 percent of CFOs said today’s salaries were at least somewhat higher.

2. Consider additional perks.
As important as salary is, it is only part of the compensation package. Professionals increasingly value perks that support work-life balance, such as additional vacation time and flexible schedules.

3. Be flexible in negotiations.
Even if you make a strong offer early, candidates may ask for more. Know ahead of time how you may be able to sweeten the pot, such as providing additional paid time off.

4. Consult a recruiter.
Tapping the knowledge of a staffing professional who understands current hiring and salary trends can help ensure your compensation plan is attractive. 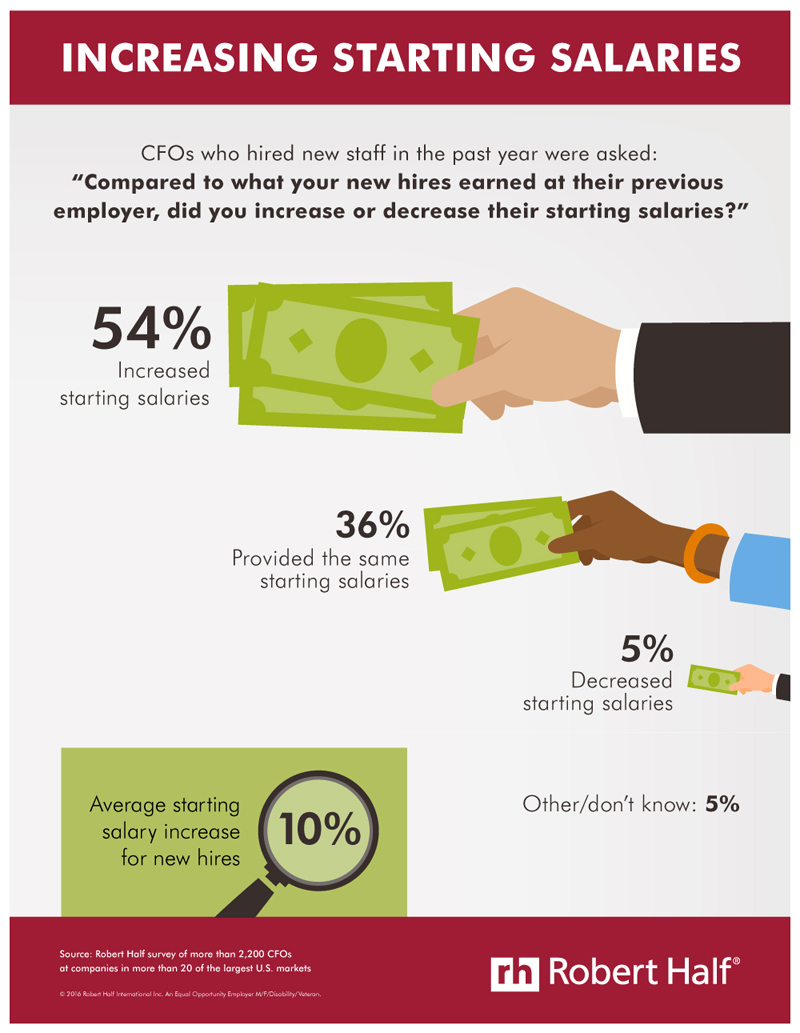 Know When to Fold ???em
We use cookies to ensure that we give you the best experience on our website. If you continue to use this site we will assume that you are happy with it.OK, got itCookies Policy
Scroll to top