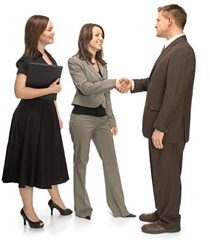 Help employers find you! Check out all the jobs and post your resume.

Your Handshake Matters More Than You Might Think: 10 Different Ways to Shake One’s Hand
By Bob McIntosh, Career Trainer

I’m a firm believer that you can tell a lot about person’s character by his handshake. In a recent interview workshop, I told my attendees about my obsession with a good handshake and, as a result, a half hour conversation ensued.

At the moment I’m talking about the the importance of making a great first impression. I tell them, “Someone’s handshake tells me many things about a person. If it is firm, the person is trustworthy, open to engagement, warm spirited, confident, and basically someone who I’d allow my daughter to date.” They all laugh. I get sidetracked and tell them about how my daughter dated a boy who shook my hand for the first time with a limp handshake. I told her soon afterward that her boyfriend better learn how to shake hands if he wants to get anywhere in life. She told me I was being ridiculous.

“If it’s limp,” an attendee speaks out, “the person is suspicious, anti-social; someone I wouldn’t want my granddaughter to date.” Laughter erupts. He has stolen my thunder.

An article on CareerBuilder.com states that a proper handshake makes employers overlook some deficiencies in jobseekers: “Prospective employers said they’re more likely to overlook visible body piercings and tattoos than an ineffective handshake, according to a 2001 survey of human resources professionals.” Though this article is dated, I think a good handshake is still a vital component of the first impression.

About.com, under an article about social disorders, talks about 10 “Bad Handshakes.” They are:

I can relate most to the “Bone Crusher” because I’m an occasional bone crusher. I once shook a woman’s hand with such force that I thought I heard her bones being crushed, or at least shifting. She winced in pain. The handshakes that drive me mad and make me want to take a hot shower are the “Limp Fish” and “Cold, Clammy, or Sweaty.”

I reached out to my LinkedIn family and posted a question about the significance of handshakes, and there were some pretty good responses. One person, wrote, “The handshake is part of the first impression. Not so firm as to cut off my blood circulation and not limp like holding a slice of calf’s liver. And God help us, not sweaty either. So make sure your hands are dry before you extend a handshake.” I love the image of a “slice of calf’s liver.”

On the other hand, a respondent to my question wrote: “I’m interested in the information the person [has] to communicate to me, not peripheral customs like a handshake.” I appreciate his opinion; not everyone places so much stock in a handshake as I do. But I don’t buy it. The “Limp Fish” would send anyone over the edge, regardless of the information.

Wiki.answers.com writes extensively on the subject of the handshake, including the proper position. “Your body should be approximately two cubits (distance from fingertips to elbow) away from the other party. Your shaking arm should be bent so that the elbow forms a 135-degree angle, and the forearm is level with the floor. Your hand should neither be on top, nor underneath the other person’s hand. Both parties’ hands should be straight up-and-down, even with each other. The web of your hand (skin running between the forefinger and the thumb) should meet the web of theirs.”

Okay, some pundits go a bit far with their explanation of a proper handshake. I definitely feel that a person should maintain eye contact while shaking an employer’s or business person’s hand, but keeping her elbow at a 135 degree angle is a bit extreme.

My customers attend my interview workshop to learn the tricks of mastering the interview, but it’s important for them to master the first impression before the interviewer starts asking the difficult question. When I meet someone for the first time, I size them up immediately based on their handshake; but that might just be me.

Bob McIntosh, CPRW, is a career trainer at the Career Center of Lowell, where he leads more than 20 workshops on the career search. Bob is often the person jobseekers and staff go to for advice on the job search. As well, he critiques resumes and conducts mock interviews. One of his greatest accomplishments is starting a LinkedIn group, which is one of the largest of its kind in the state, and developing three in-high-demand workshops on LinkedIn. Bob’s greatest pleasure is helping people find rewarding careers in a competitive job market. Please visit Bob’s blog at www.thingscareerrelated.wordpress.com.

StemCell Technologies Inc. Obtains License From iPS Academia Japan, Inc. for...
We use cookies to ensure that we give you the best experience on our website. If you continue to use this site we will assume that you are happy with it.OK, got itCookies Policy
Scroll to top